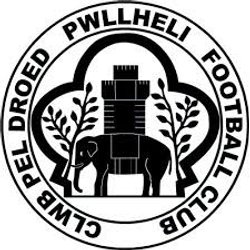 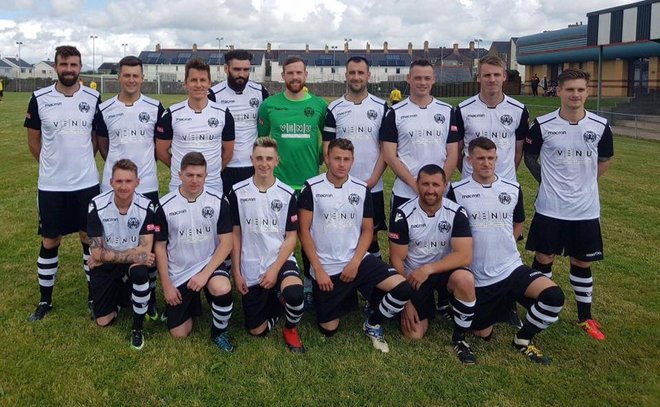 The earliest report of a football team at Pwllheli appeared in 1879 when a Club was formed on the initiative of W.Davies, headmaster of the National School at Penlleiniau and captain of the team. The first game was played against neighbors Porthmadog, who won by a single goal. A team continued to play on a field between the Old Station and Glan y Don, until the Recreation Ground became available in 1900.

During the 1920s football was played at Wembley Park, Abererch Road, but the building of Ffordd-y-Maer early in the 1930s put an end to this and the club returned to the Recreation Ground where it remains to this day.
The Caernarfon and District League was formed in the 1900-01 thanks to Messrs Solomon Andrews and Son who donated the League Shield worth £20.

The original members were Bethesda, Llanberis, Parc Faenol, Porthmadog and Ffestiniog. Pwllheli failed to win any of their games in that first season and finished bottom of the League. There is no record that Pwllheli entered this League for the next three seasons. They failed to impress when they did eventually re-join in the 1904-05 season again finishing bottom of the League. Pwllheli were refused entry into North Wales Coast League in the 1908-09 season, primarily because other clubs felt it would cost too much and prove difficult to get to Pwllheli. They were however accepted the following year despite protests from Llanrwst. Playing against teams as far away as Colwyn Bay, Denbigh and Holyhead, they finished respectably in mid table winning half their games.

The following year membership of the League again became an issue with a proposal that Colwyn Bay became its base and only clubs within a 35 mile radius could play. This was defeated and once again Pwllheli played in the North Wales Coast League. The team did not fare so well in the League but surpassed expectations in the North Wales Amateur Cup. They were drawn against Llandudno in the semi final with the game played at Bangor. Pwllheli had arranged a special train for the supporters. Favorable rates of 2 shillings (10p) return had been agreed and a sizeable crowd travelled to see the game. Pwllheli were late arriving and had to change on the train. The weather that day was so bad that the roof of the stand had to be secured with rope held down with iron sleepers to avoid further damage. The game went ahead with Pwllheli winning by 2-1.

In the early fifties Pwllheli signed T.G.Jones from Everton and was paid £10 per week (which is equivalent to over £200 in today’s money) with him came a team which were League Champions in 1950/51 and 1951/52, and won the Alves and Cookson Cup.
Pwllheli were again League Champions in 1960/61 under the guidance of Freddie Pye whose Manchester based team also won the Alves Cup. With numerous cup success during the remaining 60s and 70s with Aled Hughes at the helm for most of the 70s

It took another 18 years for success to arrive again when John Dunn brought a team from Merseyside and in 1978 they were runners up in the League to Caernarfon Town, won The N.W.C.F.A. Challenge Cup, Barritt Cup and the Cookson Cup.