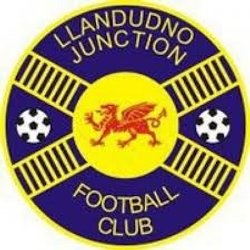 At the start of season 1999-2000, August 21st, to be precise, Llandudno Junction FC took to the field in a senior competitive match for the first time in over 45 years.

A Llandudno Junction team existed until 1954, and then the Junction and Conwy Borough, from Conwy decided to merge and form the club Borough United.

Until then, both the Junction and Conwy Borough, though both operating in the Welsh League (North) struggled to regularly attract decent gates.

The merger, it was hoped, would bring improved gates and with it success. Borough United forged their own unique history during their 13-year existence, which all local football buffs will be familiar with.

But what of Llandudno Junction? Unfortunately it seems as though not a great deal is known of the history but here are a few snippets, which we are sure, do not tell anything like the complete story.

Records show a Llandudno Junction football club first entered the North Wales Coast League Division One in 1910 and duly finished fourth. That season two of their players Ernest Parry and Tom Jones were picked to play for the Coast League East against the West.

The 1911/12 season saw the Junction knock Colwyn Bay out of the Welsh Cup in the preliminary round, only to lose to Llandudno in the next round, though season 1912/13 saw Colwyn Bay return the compliment at the prelim stage.

Sometime during this period, the club won the Railway Shield beating Edge Hill Liverpool in the final.

A Mr D Robertson was the club secretary and the club remained members of the Coast League until the 1914/15 season when the Great War intervened, though not before five of the Junction’s players represented the League East against the West in March 1914.

Llandudno Junction was next admitted to the Welsh National League in 1922. Mr H Hughes was the secretary and the club had a good league and cup record through the mid 1920’s.

The 1924/25 season was probably, to date, the second most successful in the club’s history, their league runner’s up spot (behind Mold Town) included a 21 match unbeaten run, which possibly still constitutes a club record and is a league record.

The Junction also had their second best Welsh Cup run reaching the 3rd round, losing 6-0 against championship rivals Mold.

At the end of the 1926/27 season the club resigned from the league, apparently due to the “depression”.

The Junction emerged again for the 1937/38 season, entering a team into the Vale Of Conwy League 3rd Division. Coast FA accounts for the season note that “new club” Llandudno Junction recorded a balance of £23.00.

After the war Llandudno Junction entered the Welsh League Northfor the 1946/47 season. Junction finished second in the league and enjoyed their best ever Welsh Cup run which took them to the fourth round, where they were beaten 2-1 by South Liverpool.

During the post war era, the club’s colours were maroon tops and white shorts; the club’s star player was John Myers, whom Colwyn Bay had sold to the then Football League champions Manchester City.

The summer preceding the 1948/49 season saw the large Junction supporters club accomplish the not significant task of widening the Nant y Coed pitch, erect terracing down one side.

Preliminary work for an 800-seat stand was also carried out and completed by October 1949 once the post war shortages had ended. (The Nant y Coed ground is now part of a recently constructed housing estate.) However by 1954 the Junction had merged with neighbours Conwy to become Borough Utd.

In the 1980’s Llandudno Junction FC was reformed with Ken Lloyd as the manager with a team that operated briefly in the Vale of Conwy League. The side, which was later managed by Nev Colville and then Mark Magill, played at the Flyover until they moved to Conwy to become Conwy Utd Reserves.

The current Junction side can trace its roots back to Hotpoint Football Club, which was formed in the summer of 1975. After one season playing on Sunday in the Old Colwyn and District Sunday League the Club switched to Saturday football joining the Vale of Conwy Football League Section B.

The 1984/85 season saw the team winning the Ron Jones Trophy and also topping Section B. 1986/87 was another successful year with the Section A championship and the NWWN Challenge Cup. The club joined the Gwynedd League in season 1987/88 with little success until season 1994/95 when they won the Cwpan Gwynedd beating local Llandudno Junction rivals Crosville 3-2 in the final at Llandudno.

Further success followed in season 1995/96 with the League Runner’s Up Shield, which they retained the following season 1996/97 when they were also the losing finalists in the Cwpan Gwynedd and reached the semi-finals of the FAW Trophy. In season 1996/97 in the search for further success, the team moved to Llanfairfechan FC’s recreation ground due to the limitations of the Victoria Drive ground.

It was in season 1997/98 that we changed our name to Llanfairfechan Athletic this was in order to remain at Llanfairfechan. In season 1998/99 the Club returned to Llandudno Junction, not to the Hotpoint Club but to the Flyover, which was previously the home ground of Crosville FC.

This was a most successful season, winning the Tyn Lon Rover Barritt Cup, finalists in the Gwynedd Cup and finishing 3rd in the league. This was enough to see the Club being promoted to the Welsh Alliance League.

To reflect our return to the Junction another change of name became necessary and the obvious choice was Llandudno Junction resurrecting a name, which disappeared from senior football in 1954. At the end of their first season back in the Welsh League the Junction finished in 5th position.

Seasons 2003/2004 and 2004/2005 were disappointing with the departure of our previous management team heralding the arrival in season 2005/2006 of local lad Gary John Jones as our manager – in that season we reached the semi final of the FAW Trophy, finishing 7th in the league.

Season 2006/2007 was another disappointment with the resignation of Gary John in the October that led to the appointment of our longest serving player Daryl Smith and club captain Dwyfor Williams as joint player managers, the team finished in 12th place in the league but did manage to get to the semi final of the Cookson Cup.

Season 2007/2008 saw Gary John back at the helm with Junction favourite Paul Evans as his assistant; however this was not to last as the side fell to the bottom of the table.

Darren Barrett took over the reins as 1st team manager but despite his valiant efforts we were doomed to finishing in bottom place. Relegation loomed but we were saved by the fact that no team from the Clwyd League was eligible for promotion.

Season 2008/2009 saw Shane Cartwright in charge as 1st team manager with Lee Thornton as his assistant. This was our best season ever in the Welsh Alliance league, finishing 6th in the league and winning the Barritt Cup for the 1st time in Junction’s history.

For the season 2009/2010 Jon Stazicker replaced Thornton as assistant, taking over as manager when Cartwright left the club towards the end of the season, he stayed in charge for the 2010/2011 season. Ex player Denley Smith was appointed for the season 2011/2012 and continued into 2012/2013, however a disastrous first half that saw the club lose all 10 league games, slipping to the bottom of the league, was the catalyst for Denley leaving to be replaced by Matt Jones.

Matt was probably the youngest manager at Welsh Alliance level in Wales but even a last minute burst of wins could not prevent the club from finishing next to bottom. The momentum could not carry on into season 2013/2014 with Jones leaving the club after failing to win a single point in the first seven games of the season. Joe Morgan and Darren Jones took charge of the team, both well known local lads.The team finished with 27 points and were runner's up in the Mawddach Challenge Cup. Season 2014/2015 proved to be far better withe the club finishing in 2nd place in the league, our highest ever. We also reached the 1/4 final of the FAW Trophy. The season ended with Darren Jones taking sole charge being assisted by Mark Orme. Unexpectedly Jones and Orme decided to leave the club prior to the start of season 2015/2016 and were replaced by Oliver Walters and Martyn Jones. Walters is no stranger to Junction having previously played for both the Youth and First Teams.