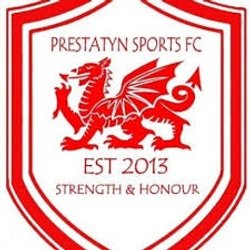 Prestatyn Sports is a club that was formed in 2013 by 6 former members of Prestatyn Rovers. The lads dug deep into their own pockets to fund the Prestatyn Sports project. Buying two kits and tracksuits for the team. And leasing a pitch in the town called 'The Meadows'

Our first season in The Clwyd & Conway League Division 1 was a success ,we finished runner-up and gained promotion into The Clwyd Premier League also finishing Runner-up in The R.E.M Jones Cup.

Our second season we strengthened the club both on and off the field whilst also adding a Reserve team into Clwyd League Division 1. As a result the club achieved the unthinkable, Prestatyn Sports 1st team finishing off 2014/15 as Clwyd & Conway League Champions (winning 19 out of 20 games ), NWCFA Intermediate Cup Champions, Normac Premier Cup Champions and Salisbury & Co Presidents Cup Champions. An unheard of quadruple .

On the strength of the quadruple winning season we were promoted to the Welsh Alliance Division2 but our Meadows home ground didn't meet the ground criteria , so a temporary home ground was found in the recreation ground , Gronant , nicknamed 'The Fortress'

The 2015/16 season was a big learning curve for the club but a respectable 6th place finish in our debut season and runners up in the Welsh Alliance Challenge cup was deemed successfull.

The 2016/17 season brought more silverware as we went one better than the previous season winning the Welsh Alliance Challenge Cup and a much improved 3rd place finish in the league.