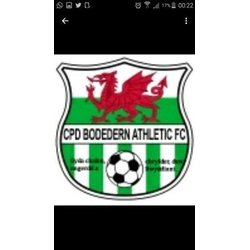 Formed in 1946 Bodedern FC have a proud history - they were in the Anglesey League.Here are some of the honours they have collected on the way.

1999 Anglesey League Champions, JW Lees Cup, Megan Cup and Dargie Cup. for over 50 years.
Bodedern entered the Gwynedd League in 1999. They finished third in their first season and were also runners-up in the Barritt Cup. This cup has featured prominently in Bodedern's history.

2001 brought more silverware and another double - Bodedern won the Presidents Cup and the John Smiths Gwynedd Cup. They were Eryri Shield runners-up and they finished fourth in the Gwynedd League.

2002 was a massive year for the club - they won the Gwynedd League, scoring 96 goals in only 24 league matches. In the same year they won the Eryri Shield, the Presidents Cup and the John Smiths Gwynedd Cup. They were also Barritt Cup runners-up for the second time.

2003/4 saw Bodedern win the Barritt Cup for a second consecutive season, and they finished fourth in the league.

Bodedern then achieved promotion to the Cymru Alliance League for the start of the 2005/06 season,where they finished a creditable 9th place in the league.

2006/07.Cpd Bodedern were unable to continue in the Cymru Alliance and withdrew from the league.